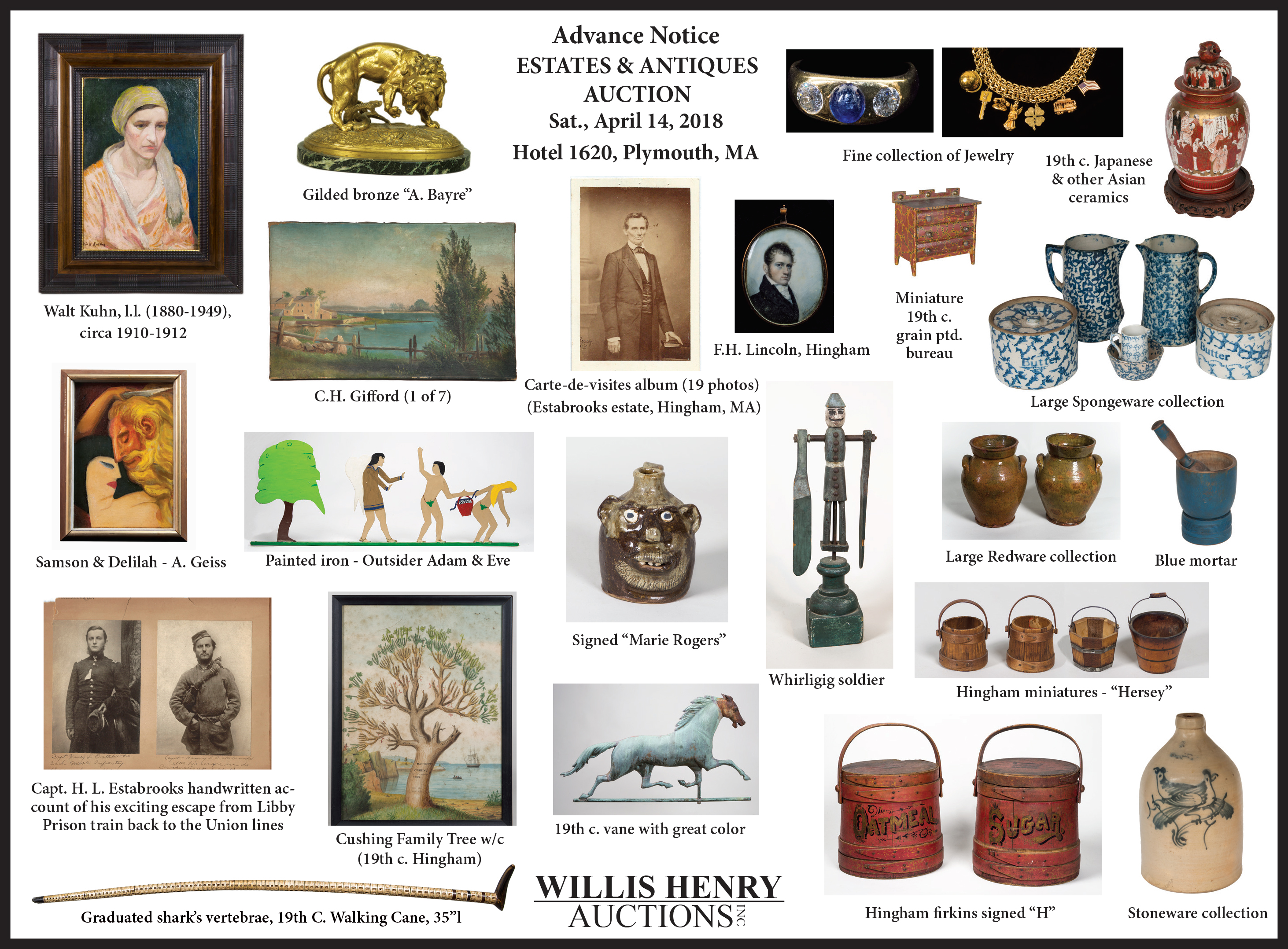 The arts include two oils by Walt Kuhn, one of a woman pondering, and the other of a nude surrounded with colorful fruits; along with a number of other paintings and bronze sculptures. Paintings include six C.H. Gifford’s, approximately 10 paintings by Alexander Geiss from his estate, L.D. Eldred oil, aquatint by Georges Rouault, etching by Jacques Villon. Bronzes by Paul Edward Delabrierre, Antoine-Louis Bayre, Auguste Moreau, Vince Valdez (mother bear teaching salmon fishing to her cub, found in Jackson Hole, Wyoming), and Richard Salews.

Estate jewelry will also be in the spotlight with diamond rings, gold bracelets and necklaces from famous makers as Tiffany and Watches will also be sold from makers as Tag Heuer, Cartier, Benrus, and 14K gold pocket watches from Duxbury and Hingham, MA estates.

A 19th c. Boston banjo clock signed by Aaron Willard will be sold from an estate in Marshfield, MA and from the same home comes early flintlock rifles with tiger maple stocks and percussion pistols. Calendar clocks and other wall clocks from the South Shore will be offered as well.

The town of Hingham “Bucket Town” was well known in the latter half of the 19th c. as a supplier of wooden toys, pails and firkins to General Stores across New England. The auction will feature a pair of painted firkins with decoration signed by a Hersey family Cooper. 19th c. toys made by the Hersey’s and Tower will also be sold.

A rare group of Civil War items from a Hingham estate that includes the original manuscript of a Union soldier (Capt. H.L. Estabrooks) from the 2nd Mass. Infantry, which describes his escape from a POW Train (after leaving Libby Prison in Richmond, VA), and working his way back through the Confederate states to the Union lines will also hit the auction block. This thrilling escape as described in his 1865 memoir was facilitated with the help of slaves from cotton and sugar plantations. His journey north was published in the 1860’s and is still in print today as Adrift in Dixie. The original manuscript has pencil illustrations which are not included in the printed version. Along with this important book are photographs of Estabrooks before and after his escape, the Estabrooks Family Bible, and a photo album of CDV’s including a portrait of A. Lincoln, Generals and politicians of the 1860’s.

Another important Bible to be sold is a Dutch 1730 version with five period maps, including one of the world that shows California as an island off the West Coast.